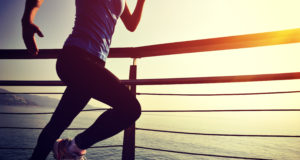 Of all the hullabaloo about carbs in your diet, no-one seems to be asking this important question. The general advice about diet in diabetes seems to be swinging towards limiting your carbohydrate intake. This makes sense.

When we eat carbohydrate, the pancreas needs to make insulin to deal with the glucose load. The role of insulin is to push glucose into the cells, keep the blood glucose levels constant within a narrow range and make sure any excess is stored as fat.

The more carbohydrate we eat the harder the pancreas has to work to keep the blood glucose within that narrow range. After a number of years it gets tired and can’t keep up. Now there are many people advocating that we don’t need carbohydrate in our diet. But I think that’s missing the point. We need a balance of carbohydrate and fat to provide energy and this is where we have gone wrong.

If we look into sports science, the best endurance athletes like marathon runners, triathletes and cyclists use a combination of fat and carbohydrate for energy. And it’s easy to test this. Many competitive athletes strive to become better fat burners as it gives better endurance throughout a race.

The bottom axis is pulse rate and the Y axis is energy burned. If you follow the red line it shows using fat for energy. So at low pulse rates, where you are working in the office, doing housework or walking, the athlete is burning fat for energy almost exclusively. There is very little carb burning. However, as the intensity of the exercise increases, the pulse rate goes up and at some point, changes over to carbohydrate. So running full blast you will be using carbohydrate.

Now the interesting thing about carbohydrate is we can generate energy quite quickly from it. So when you’re out hiking and you feel absolutely beat, you have a chocolate bar and within a few minutes you feel re-energised. With fat it takes a bit longer to get going, like a train pulling out of a station. But the upside is we all have endless supplies of fat to provide energy. Even the skinniest person, has around 15% body fat to obtain energy from.

So once you start tapping into fat, it can keep you going all day.
If you rely on carbohydrate, there’s only a small amount stored in our liver and our muscles so you have to keep replenishing it by eating more carbs.

Here’s an example of a poor metabolism. There is very little fat burning at any level of exercise and the person is relying on carbs the whole time. Now you might get away with this if you are doing plenty of exercise, but if you’re pretty sedentary it’s not good for you long term. You need to keep re-fueling with carbohydrate and that puts pressure on your pancreas.

So this is the picture in most Type 2 Diabetics, burning mostly carbs for energy. And the problem is, there is always a payback. Using carbs for energy all the time is turbo-charged. It creates a lot of inflammation as it produces energy, and that needs quenching.

We are designed to burn both fat and carbs for energy. The problem is most of us live in the fat burning zone most of the time but depend totally on carbs to fuel us. Life is a marathon not a sprint.

Over the coming weeks, I’ll explain more about this and how to change your body to become a great fat burner…

What are you eating when you buy a bar of chocolate? Is it one…

The flavour saver – bringing back tomatoes

A new study published in science from the University of Florida, aims to bring back…

Diabetes Doc in the Kitchen #2 Replace potato with celeriac

Want to give up carbs but can't resist potato? Try out celeriac puree. Its delicious,…