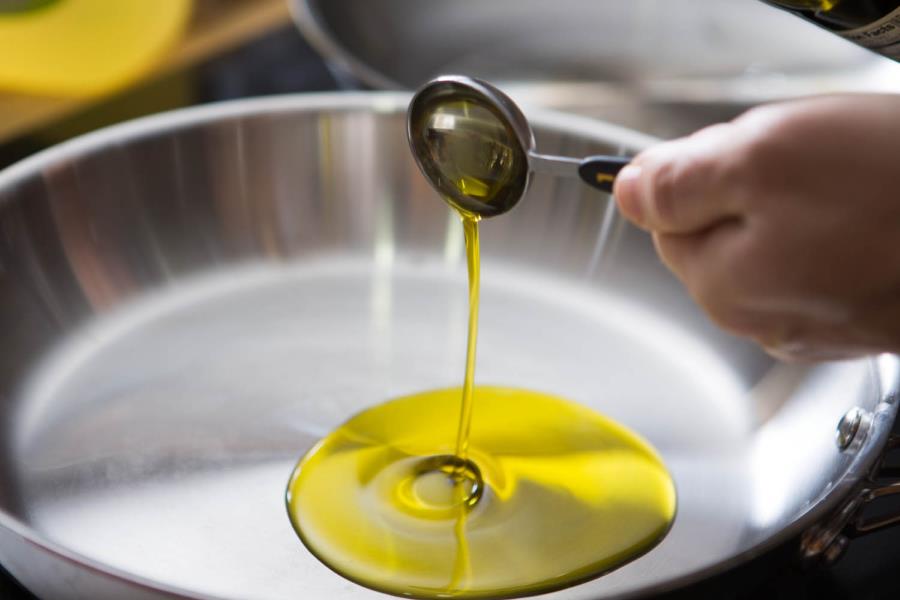 What’s important about cooking with oil is at what point it reaches its smoke point. In cooking, the smoke point of an oil or fat is the temperature at which it begins to break down to glycerol and free fatty acids. At that time it produces bluish smoke. The glycerol is then further broken down to acrolein, which is the part of the smoke that irritates our eyes. The smoke point also marks the point at which the flavour and the healthiness of the fat deteriorates. Therefore it’s really important to choose the oil you cook with carefully.

In practice, olive oil is not great for cooking, as its smoke point is quite low. Industrial refinement also changes the smoke point of several oils, so try to use the most natural version you can find. Use other oils like coconut oil, butter or nut oils for cooking. I use a mixture of olive oil and coconut oil for Asian cooking, and it works really well. The coconut oil prevents the olive oil from reaching its smoke point and the combination gives a great flavour. For a Mediterranean flavour use organic butter and olive oil.

Plants often contain chemicals like cholesterol, but in a different form called plant sterols. Olive oil contains some good plant sterols. According to research, adding plant sterols to your diet seems to reduce bad cholesterol (LDL) and increase good cholesterol (HDL). So food manufacturers have been adding these oils (like olive oil) to margarines in an attempt to make them sound healthier.

However, the amount that added to these spreads is probably very small and so the benefit that you get from them is also very small, not like the price which is often much more than regular margarine. Better to use olive oil itself as a spread or mashed avocado. Remember that these margarine spreads are hydrogenated vegetable oil (trans fats) so it’s adding a small amount of something healthy to a really unhealthy product. The long-term benefit of this tiny amount of healthy plant sterol in your spread is likely going to be around a 1 percent improvement – doesn’t really justify its price.

A great apple cider vinegar cleanser to re-hydrate after work

We need the building blocks of protein (amino acids) to make muscle, bone, tissue and skin. And we also need amino acids to make enzymes, hormones and even our DNA.

Originally from the UK, Dr Shirley is a Nutritional and Family Doctor, published author,
and currently lives in Australia.
Powered by WishList Member - Membership Software